Thinking about self-publishing and wanted to know about the biggest retailers for your digital and print books? We break it down for you in our easy to navigate guide below. A few years ago you had to use a distributor to get your books into all the major retailers.  Now, most retailers allow authors to […]

This week on #indiechat Shelli Johannes @SRJohannes, Ali Cross @Ali_Cross, and the rest of the #indierecon team will be talking about the self-pub online free conference called #indierecon.

15 Reasons Why You Should Register for IndieReCon

Want to know more about indie publishing? Read these 15 reasons why you should go to IndieReCon this year! Plus, we’re a sponsor and our CEO will be doing a presentation.

Have a book coming out? Don’t start your marketing until you read this list of 10 book marketing mistakes that self-published authors make. 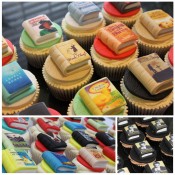 We couldn’t help but post. Our favorite book-inspired cupcakes for Valentine’s Day from Victoria’s Kitchen in London.

Predictions on Where Indie and Self-Publishing is Heading in 2014

I’m generally not very fond of making predictions about the future, particularly in the technology space.

This week on #indiechat Olivia Koski from The Atavist  will be our guest. Olivia will be talking about The Atavist’s new multimedia ebook production tool called @Creatavist.