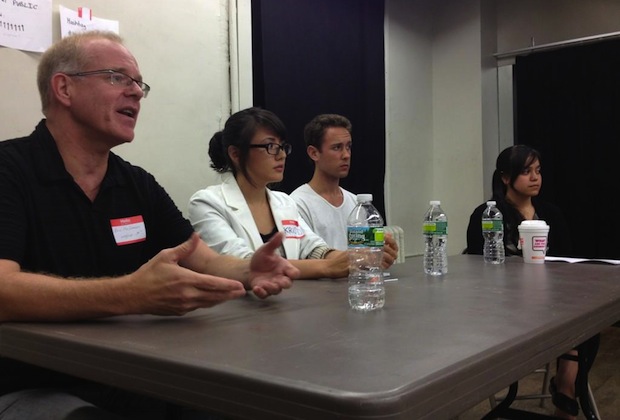 Eric Hellman, Kristen Jex, Jesse Potash and Sabrina Ricci offered advice from their success in the emerging crowdfunding scene to the guests at our New York City meetup on Monday.

For the last century, corporations and shareholders managed the funding of media. While publishing houses release thousands of books each year, many more manuscripts face rejection. Crowdfunding websites like Kickstarter and Indiegogo offer a new alternative to this model. Authors can advertise their book projects to members the general public on these sites. If users find the stories interesting, they can fund the projects themselves.

While crowdfunding websites offer solutions for indie writers and publishers, they can be confusing for first time users. BiblioCrunch CEO Miral Sattar hosted the NY Self Publishers meetup to show people the best ways to use this payment model. She introduced four self-starters who made a splash in the crowdfunding scene, each one offering advice from their experiences. Here are some of the most interesting tips:

Crowdfunding can be a useful and exciting model for aspiring indie storytellers. Still, writers, up-starts and publishers need to be prepared to take the most advantage of it.

Steven James Graboski is a writer, reporter and web developer in the New York Metro area. You can learn more about him at sjgraboski.com, or follow him on Twitter: @SJGraboski.